VR (Virtual Reality) has been adopted by at least one graduate recruiter (1), so it will be interesting to watch whether this will be an increasing trend in the future. This post looks at why recruiters are interested in using VR, provides insight from Warwick careers staff on their experience of VR and considers whether it is possible to prepare for this type of assessment. 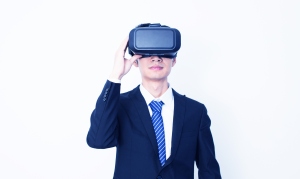 Some of my colleagues and myself were recently invited to gain some first-hand experience of a typical VR assessment process by Capp. Capp’s research shows that individuals are very likely to have the same reactions towards situations they encounter in VR as they would do in real life. By assessing strengths and performance in a virtual world, recruiters now have a way to be more certain about whether individuals will be able to demonstrate required strengths for a role if they are hired.

What does a VR assessment task involve?

The first step in using a VR headset is headset calibration. This involves measuring the distance between your pupils to ensure that the VR world is viewed correctly. (The distance between my pupils is apparently pretty average!) The headset is connected to the technical set up by a lead and I was told to be very careful I didn’t trip over ‘my tail’.  I felt like I was being dressed to take part in an episode of Dr Who, as you will be able to see from this photo of my colleague James Goodwin undergoing his VR experience! My instructor put me at ease as he talked me through what I was seeing through my headset and explained how to use two hand-held controls to pick up and move objects. Although I’m not someone who plays computer games, I was able to pick up how the motion controls worked fairly quickly.

I was led through different scenarios where I was expected to complete various tasks. I really enjoyed some of the tasks and realised afterwards that these were the ones which played to my strengths. I can’t say more than this about the nature of the tasks I’m afraid (I’ve been sworn to secrecy) but they felt very realistic. It took me a good thirty minutes to adjust back to my environment once the headset was off and I felt a distinct floating sensation when walking back down the corridor to the waiting area.

Here’s a further reaction by my colleague Anne Wilson on her VR experience.

Even though the rational part of me was saying ‘this isn’t real I’m wearing a headset’ the actual experience feels so real it’s impossible not to find yourself immersed in it and responding as it if it is real! (Anne Wilson, Head of Careers)

Can you prepare for a VR assessment? 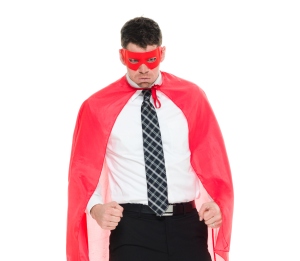 I’m showing my age now but one of the tasks I faced in VR reminded me of a challenge from the 1980’s show ‘The Adventure Game’. Even though I knew that I was in a room at Warwick and not really in a Crystal Maze style situation in real life, I couldn’t make myself complete this task. This really shocked me, as before I put the headset on I kept telling myself that I would be fine, as it was just a game and not real!

I felt a bit better when I was told that many others had reacted in the same way to this task and decided that it was a probably for the best that I hadn’t accomplished the task as there was very little likelihood of me rising to the challenge of doing it in real life.

It’s my opinion that you shouldn’t try to overthink VR assessments and should approach tasks in an authentic way. If you react in way which isn’t being true to yourself, you may well find that you are placed in a role which doesn’t play to your strengths.

I’ve tried to give you a flavour of VR activities you may encounter and reactions you may have to doing this type of assessment.  At the moment the VR experience we had with Capp focused on assessing individual strengths.  However, with advances in augmented reality, who knows what the future holds and whether recruiters will work with organisations like Capp to develop ways of assessing team work skills using VR too?

(1) Your next interview could be in VR: Lloyds trials virtual tests for candidates

With many thanks to Capp.